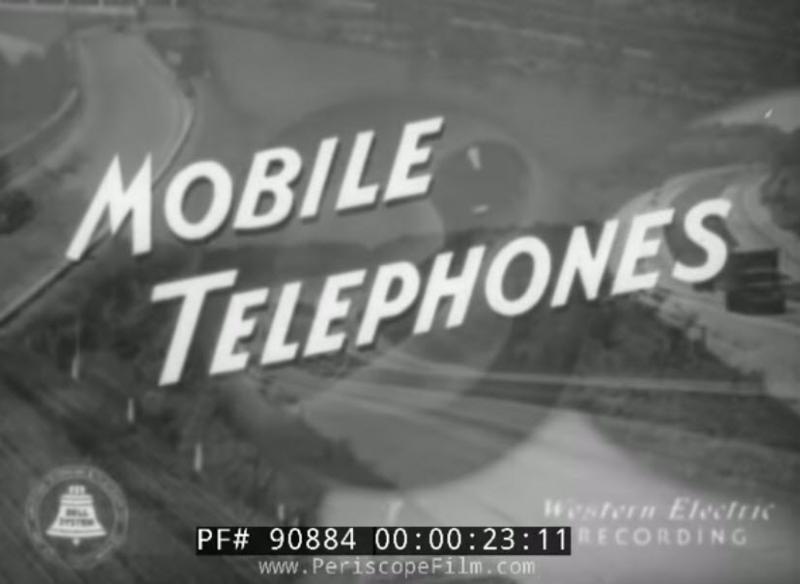 Created in the late 1940s, this film from Bell explains the operation of the Mobile Telephone Service (MTS) by showing how it can be used to make business more efficient. The film also shows some of the cutting edge equipment used in the system and shows how it was installed in vehicles (7:30). MTS was a pre-cellular VHF radio system that linked to the Public Switched Telephone Network (PSTN). As such it used both radio signals and telephone lines to connect parties. MTS was the radiotelephone equivalent of land dial phone service. The Mobile Telephone Service was one of the earliest mobile telephone standards. It was operator assisted in both directions, meaning that if one were called from a land line the call would be routed to a mobile operator, who would route it to one's phone. Similarly, to make an outbound call one had to go through the mobile operator, who would ask for the mobile number and the number to be called, and would then place the call. This service originated with the Bell System, and was first used in St. Louis on June 17, 1946. The original equipment weighed 80 pounds (36 kg), and there were initially only 3 channels for all the users in the metropolitan area, later more licenses were added bringing the total to 32 channels across 3 bands This service was used at least into the 1980s in large portions of North America. On October 2, 1946, Motorola communications equipment carried the first calls on Illinois Bell Telephone Company's new car radiotelephone service in Chicago.Due to the small number of radio frequencies available, the service quickly reached capacity. MTS was replaced by Improved Mobile Telephone Service (IMTS), introduced in 1964. All calls were placed by a suitably equipped telephone operator. Outgoing calls were placed when the operator connected to a base station (originally using a cord board, but by the 1990s could be done by dialing a code sequence from a TOPS position), then announced the call over the channel (giving the channel's name first), e.g., "Adams calling 2M-2368, 2M-2368, 2M-2368." The page would usually be repeated twice more after a pause. The called party had to have their unit on and the volume set at a level that allowed them to notice a call and then listen to the called number. If the called party heard an incoming call, they would then use the microphone to announce they were receiving the call, and the operator would allow the two parties to speak, monitoring for the end of the call and marking a manual ticket for billing. We encourage viewers to add comments and, especially, to provide additional information about our videos by adding a comment! See something interesting? Tell people what it is and what they can see by writing something for example: "01:00:12:00 -- President Roosevelt is seen meeting with Winston Churchill at the Quebec Conference." This film is part of the Periscope Film LLC archive, one of the largest historic military, transportation, and aviation stock footage collections in the USA. Entirely film backed, this material is available for licensing in 24p HD, 2k and 4k.

Simplifying the setup for people who want to use a Pi as a PC.