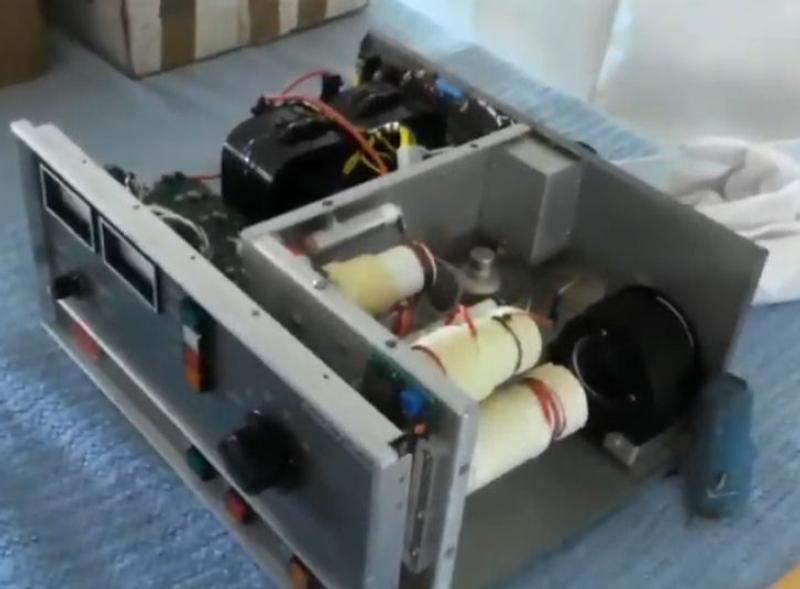 Built by Nick Tusa, K5EF, this beautiful amplifier exploits the "Mysterious" Batchelor Broadband Coupler, which enabled the first no-tune, broadband amp design used in the 100V.  This potted device was explained by Nick, but was a real mystery in the 1950s to Central Electronics' startled competitors.  Per Nick:

"This is a desktop 2500L that I had designed and intended to manufacture in the mid-1980s.   My company then was Crescent Radio Electronics.  We did custom design and radio system work for the offshore petrochemical/oil industry.  As soon as we displayed this unit at Dayton in 1985, the oil industry tanked, which seriously wounded us.  We lost our funding capacity to build these sets. "

"With 75 watts of drive, we could achieve 1,700 watts output on 20M.  The Eimac 8877 is an excellent high-linearity tube that just wants to make power.  The 10M coupler needed further optimization, but my business partner and I had to put our amplifier project on the shelf since we were forced into survival mode for the next several years.  To offset the revenue loss we moved into the paging business building digital paging transmitters and configuring paging systems.  That morphed into 800MHz mobile telephone service…and sadly we never could get back to building the amplifier project.  Eventually I moved into public safety radio systems."

Nick continued: "I recall driving to Wes’ home in Chicago at the conclusion of the ’85 Dayton show to let him see our version of the 2500L and, man, was he in love!  Our plan was to have him in our booth the next year helping drum home sales and wouldn’t that have made some news!"

Nick lamented that some folks gave him grief; the 2500L couplers couldn't work, and
"Wes got the same noise when he and Joe first showed the 600L at Dayton…some things never change…."

Simplifying the setup for people who want to use a Pi as a PC.