This clean and highly desirable Swan was obtained from a Schulman Auction.  It was actually packed well by a local Missouri UPS store, with lots of bubble wrapping.  Aside from a slipping inner VFO action, and having to turn the unit off/on from a power strip, it loaded right up on the 20M Vintage Sideband Net, receiving good reports from stations in Nebraska, Texas and Michigan.

I sent the serial number to Stu, K4BOV, to check its history in the Sacred Swan Database:

"That radio was built in August 1974. There is a little history on that one in the database.

It doesn't show the name of the original owner; but, says Sonny Eisenberg, WA9KXQ bought the radio and Swan 117XC for $150 from the estate of an SK. Sonny reconditioned it and sold it in December 1999." 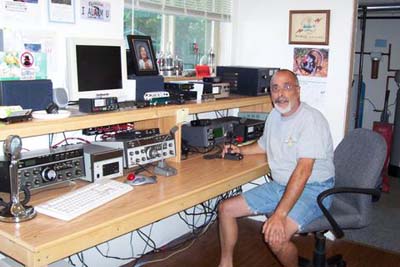 I've known Sonny (pictured left) for years; he is now W4KXQ and lives in Florida.  Sonny is my hero - not because of his rugged good looks, but in part because he has likely had more radios than I will ever have, and also because he's just a swell guy.  Sonny was gratified that the old Swan ended up in my hands, and reports that he misses his Swan Twins.

By the way, Stu had some information on the Swan Twins as well:

The twins were  actually quite rare - only 600 of the transmitters and 450 of the receivers were  ever built.

Jeff, WA8SAJ, has a fully operational set of the Swan Twins (picture here) and have only heard a couple of sets on the air.

You can find Stu, K4BOV and many other Swan enthusiasts on any of the three Swan Nets:

December 2018 UPDATE: Procured a nice set of Swan Twins from the estate of John, AA5T (pictures and more information here)  Bob, W9RAN, also has a set of the twins.

Featured in the December 2018 issue of QST

Check Out the National NC-183D!

Thanks to Jerry, K9GAS, for this superb example.

Buy a 12VDC fan for your face mask!

Build Your Own Altair 8800 Personal Computer

(There are currently no Blogs.)